Theatre to debut ‘The Book of Everything 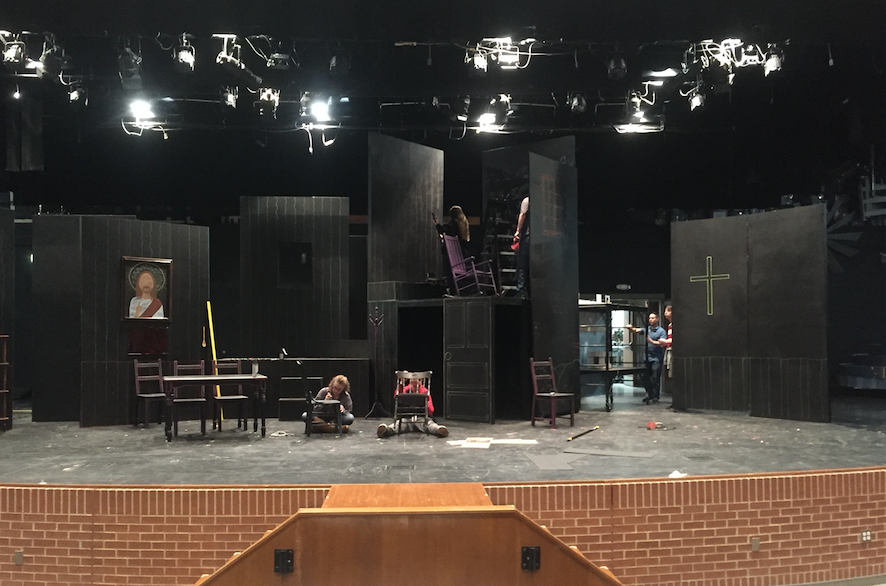 The Book of Everything will be performed on Nov. 5 and 7 at 7 p.m. Pictured above, students in the technical theatre class put the finishing touches on the set.

“The Book of Everything” is a production presented through the imaginative mind of a nine year old boy named Thomas, who faces several adversities. However, Thomas  has a positive outlook on everyday life, which allows him to experience remarkable things.

The theatre department will perform this production on Nov. 5 and Nov. 7 at 7 p.m. in the auditorium. Tickets are are $6 for students and staff, and $8 for adults, and are available at here and at the door

Thomas uses his imagination to create a magical world where anything is possible. His adventures during 1951 in Amsterdam include strange encounters with Jesus, falling in love, and friendship with the crazy witch next door.

Thomas writes down everything in his diary, The Book of Everything, to record all of his extraordinary experiences.

“My favorite thing about portraying the character of Thomas is that I have learned so much from him,” sophomore Jerad King said. “He is a 9-year-old boy who witnessed and experienced things that a 9-year-old shouldn’t have to, and he has a brilliance in the way he treats the situations and copes with these situations.”

This small-casted show is performed by the production class, and also has a few technicians from other theatre classes. There are five ensemble members in the cast who help narrate the story of Thomas and his adventures through scattered lines and special effects.

“My favorite thing about being in the ensemble is that the ensemble members are very important to the show and we work cohesively  to tell the story of ‘The Book of Everything,’” sophomore Lindsay Haden said.

This show is special because theatre teacher John Davenport will be making his directorial debut with The Book of Everything. Typically, director Jessica Brewster works alongside Davenport who is in charge of the technical direction for each production here.

“I have really enjoyed watching how Davenport directs because I like his unique spin on everything,” Haden said.

Student director Sonali Mehta is assisting Davenport by  directing as well as performing in the ensemble in the show. This is her second show to student direct and perform in this year.

“I have really enjoyed directing this year because I learn and take away so much from the people I work with in each show,” Mehta said.

Because the show deals with topics such as pain, religion, and abuse, the show is recommended for students 12 and older.