Leopard Friday: not just a tradition 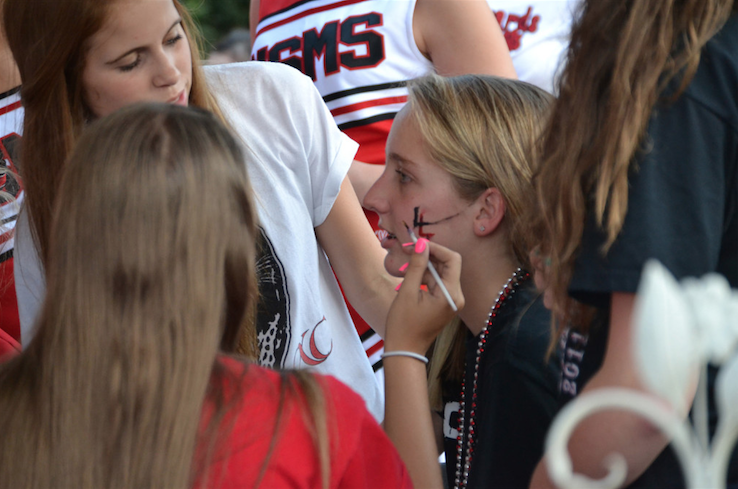 On Friday, Oct. 9, the community will be hosting the annual Leopard Friday. Leopard Friday is a tradition founded by Becky Campbell.

When Leopard Friday founder Becky Campbell was a young girl, she grew up eating Ernie’s Bar B Que on Main Street amidst the festivities of Allen High School homecoming, surrounded by the entire community. Little would she know that one day, her experiences at Allen homecoming would lay the foundation for what Lovejoy now calls Leopard Friday.

Just as Campbell experienced as a child, her driving purpose of developing this event was to recreate the sense of community she had at Allen.

“It was kind of like bringing the tradition I had grown up with and I had experienced as a child here,” Campbell said. “So that was kind of my role. We wanted a small town environment here in the Lovejoy ISD district, even though we don’t have a town center. But we have that courtyard [at the high school]. And that courtyard to me is the same thing as the square in McKinney or MainStreet, Allen, Texas. For me, that courtyard could be Lovejoy’s town square.”

Leopard Friday was also created to bring school spirit to not only the high school, but the whole community, especially the younger students.

“The purpose of this was to bring the community together in one large event, and also, we wanted little Leopards to want to be grown-up Leopards,” Campbell said. “ We wanted to have that kind of thing where they could come, throw the football with the football players out there through the tire, or the baseball players, or the softball players. They’re out there watching basically their heros. The point was that we really wanted the little Leopards to be big Leopards. We wanted them to be excited about coming to the games.”

In order to jumpstart this operation, a huge amount of manpower and time was provided by the PTAs.

“First of all, it was a huge cooperation between the PTAs, because at the time, we had Lovejoy High School, we had Lovejoy Middle School, and Hart, and Lovejoy Elementary,” Campbell said. “And so, between those groups and PTAs, we worked together to come up with a plan on how we could organize it. So the PTAs all came together to put on this event in the district. You have to have extra custodians, so the district bought into this idea that we could fund this project, and the PTAs didn’t have to spend a lot of money on it. We put a lot of manpower in it but not a lot of cash.”

Even though Leopard Friday is centered around a home football game, other sports and clubs set up booths in the courtyard to raise awareness for their organization.

“PTAs were the organization of it, but then we extended it and brought all the other groups into it,” Leopard Friday Co-Founder Gretchen Sims said. “That’s where all the booths and things like that came in, so that they could be a part of it and they could make everyone aware of their groups and participate. And yet it was all centered around a football game, which Texas’s football is so huge, so that was kind of the natural time to do it.”

The tradition of Leopard Friday continues, with this year’s on Oct. 9.The only thing that is different from the very first one on Sept. 21, 2007, is that it is no longer run by the PTAs, but the students.

“The only thing that’s really different is that the PTAs don’t run it it.” Leopard Friday Co-Founder Kelli Litchenburg said. “It’s all run by the high school kids, student council, student driven,”

Since Leopard Friday was founded, it has impacted the community and created a long-lasting tradition.

“I have been going to Leopard Friday since I moved here in fifth grade and it’s really cool to see how much it has changed since I started going, and even since it first started,” sophomore Callie Mayfield said. “I love how everyone in the community comes together, even if it’s just for one night at a football game.”