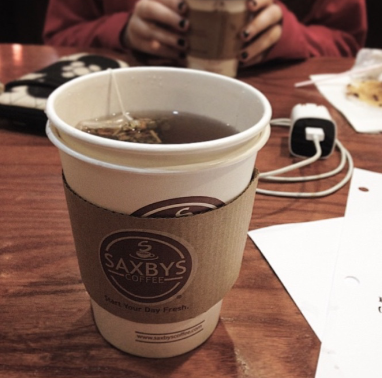 Coffee house, an event hosted by the choir booster club, will be catered by Saxbys Coffee and Rita's Shaved Ice.

The courtyard will be transformed into a cafe as choir students perform live for their upcoming event “Coffee House.” The event will be held on Sept. 18 and will be from 6-8:30 p.m., where as well as live performances, there will be coffee and snacks.

Coffee house has been a choral tradition since the school opened in 2006. In previous years there has been a theme to Coffee House, such as last year’s Beatles theme, however this year it is open to any genre.

Coffee house is for all ages; freshman through seniors all have the opportunity to perform.

“To me, ‘Coffee House’ is a great time of the year for students and parents to bond over great music and have fun times,” Fraser said. “Coffee house is a time to strengthen relationships through singing and spread how awesome it is to be in A Cappella and Spotlight.”

Coffee House is primarily showcasing the Spotlight and A Cappella choral groups and students, however the event will also include some middle schoolers’ performances.

“A Cappella is singing a song with Limelight which is the middle school A Cappella group and we get to work with them on the song so it’s just fun to help and stuff,” senior Tucker DeVinney said.

Choir students have put in a lot of effort to prepare for this event. For seniors, it will be one of their final performances and has a lot of meaning to them.

“I am performing ‘Old Man’ by Neil Young, plus other songs with the A Cappella group,” senior Maddie Keosoff said “Performing is what I want to do, so I like taking every opportunity I can to play music.”