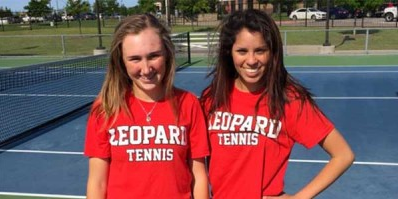 After winning the District 10-5A girls doubles championship and finishing second in Region II, freshman Samantha Hayward and senior Anna Dickens took 3rd place at the state championship after finishing one of their matches at 2:30 a.m. at Texas A&M.

The duo of freshman Samantha Hayward and senior Anna Dickens traveled to the Texas A&M tennis courts this week to compete in this year’s state tournament. After their first match was delayed until midnight Tuesday, the two delivered a win against Tomball Memorial High School with scores of 2-6, 6-3, and 6-4. After though came a disappointing defeat at the hands of San Antonio Alamo Heights with scores of 6-1 and 6-1 leading to a third place finish.

“I enjoyed staying up until midnight to play our first match and not getting off until 2:30 a.m.,” Dickens said. “It was cool just because things don’t happen like that in tennis and it was something different.”

Despite a tough defeat in the semifinals, Dickens was satisfied with her effort in the tournament.

“I’m pretty happy about how I played,” Dickens said. “I played hard and gave it my all which is all that matters to me. The one thing I can improve on is staying in the moment longer. Every second in the game matters, and one more shot can change the whole game around.”

The midnight delay was not only a unique experience, but may have provided an advantage for those playing at the tournament.

“I’d rather play at midnight than play during the day,” Hayward said. “It becomes easier because there is less wind influencing the ball, and the sun isn’t out bothering you.”

Although the weather presented several obstacles, neither player blames the rain.

“I was surprised by how much it rained while we were there,” Hayward said. “It was equally surprising the directors didn’t do a lot to plan for the rain. The rain didn’t play much of a factor in our games, we could’ve ended our games better. To get past the semis we would’ve needed stronger finishes. We were up at the beginning of several games but we lost those leads sometimes.”