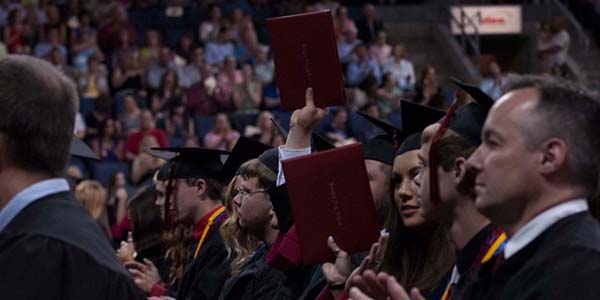 With the crowd applauding, some 2014 graduates raise their diplomas.

Graduation requirements for this year’s seniors may be eased with Senate Bill 149, proposed by Texas Sen. Kel Seliger, R-Amarillo. The bill states that seniors could opt out of the five state end-of-course exams (EOCs) and still receive a diploma as long as they qualified for new exemptions. The bill was approved by the Senate Education Committee on March 4, and Seliger hopes for it to pass through the Texas Senate in time to increase graduation rates for the class of 2015.

“Without a high school diploma, these students cannot attend college, join the military or qualify for many jobs,” Seliger said to the Dallas News in February. “We want to make sure there aren’t any artificial impediments to these students graduating.”

Many students in Texas will drop out after repeatedly failing state standardized tests like STAAR. More than 28,000 students in Texas may not graduate this year because they have not passed one or more EOC exam, making the issue of SB 149 an urgent one to Seliger.

“We are refining our accountability measure, and I think it gets better all the time,” Seliger was quoted in Education News in February. “At the same time, we don’t want young people to be retained in school who really ought to graduate.”

Students who were unable to pass EOC exams after multiple attempts would be evaluated by “individual graduation committees” made up of parents and school district staff, who would take a vote on whether the student should graduate. However, some educators and senators oppose the bill.

“I would not be in favor of easing graduation requirements for seniors,” principal Chris Mayfield said. “I think that really what the state of Texas has put into place right now is a good system that really certifies that students who graduate have a certain mastery of understanding in core and electoral courses. I think it’s a good level, and I think it’s an appropriate level.”

While SB 149, if passed, could affect this year’s graduating class, the high school’s high graduation rates mean that the bill may not have much of an impact on campus.

“There’s good instruction that happens,” Mayfield said. “Not just at high school, but kids are getting great instruction all the way up, and so when they’re taking these classes with end of course exams, they’re prepared, and they know that material and they’re mastering it. Therefore, there’s not this issue where students aren’t graduating.”

“I think if your grades are above average in the class and you fail the EOC, it’s stupid that they wouldn’t let you graduate,” senior Cassie Duke said. “But it depends on the circumstance. If someone bombs all of their classes and fails EOCs, then they might not deserve to graduate.”

Seliger, a Republican, has received wide support for the bill so far, but has been opposed by some other Texas Republicans, like Sen. Lois Kolkhorst.

“How much do we spend on end-of-course exams?” Kolkhorst said at the Senate Finance Committee’s meeting in February. “If that’s not going to be our indicator, maybe we should just throw those out and save the money.”

Like Kolkhorst, Mayfield is not eager to lower expectations for students, and as principal he would rather seniors graduate after passing EOC exams.

“I don’t want to make it less because I don’t feel like that will propel students to be successful for whatever they do,” Mayfield said. “As a parent, I want my student to go to a school like Lovejoy that really continues to push them and grow them and tries to prepare them as best they can, whether they’re going to trade school, college, military, anything.”

While 90 percent of Texas students passed the EOCs, the other 28,000 will have another chance to pass in the spring before graduation. Until a vote is reached on the Senate floor in the next few weeks, the diplomas of those who did not pass the EOCs are at stake.

“This bill would be instrumental in providing these 30,000 students an opportunity to become productive citizens,” vice chairman of the Senate Education Committee Sen. Eddie Lucio was quoted by Dallas News in February. “We have some real questions about the test. It is keeping some students from graduating who have done all their coursework and passed all their courses but just can’t get past this test.”