An ode to WHAP 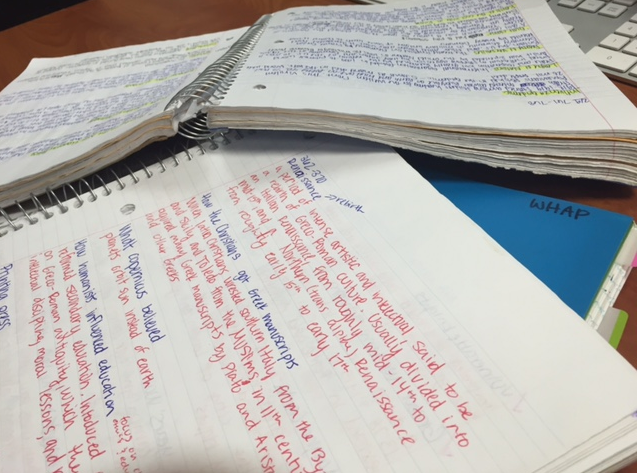 AP World History: the hardest class one may take sophomore year, and the most interesting, life-changing class I have ever taken.

My love for WHAP began last summer, when my summer reading book came in. I ordered a used, hardback copy of “A Splendid Exchange: How Trade Shaped the World,” and when it came in the mail I was taken aback by its beautiful Times New Roman font (the best font ever), baby blue cover, and yellow lemon spine. Of course, the summer assignment was no where near as lovely as the cover of my book, but I found the history interesting.

Then came the start of school. Like most students, I was initially terrified of the nightly homework, huge textbook, and, of course, Kevin Finn. But as we got to the second unit, I began to look forward to learning about the Umayyad Caliphate and the conquest of the Mongols. I quickly discovered that things we learned in WHAP suddenly connected to everything and every class. I began picking up on things people said that were about history, and realized that I had a mental timeline and awareness of humanity and the events involved. And, I loved it. I felt that a veil of ignorance and lack of knowledge had been lifted from my eyes. Of course, there are things I do not like about the class, mainly the essays, but with those aside I enjoy the learning that comes from the course. The tests are not that bad, and neither is the homework, because the material is all so vastly interesting.

I’m not the only one either who has been so affected by the class. I know some upperclassmen, namely my fellow editor-in-chief Julia Vastano, who also loved WHAP. So, I’m not that crazy. There is nothing wrong with being in love with a textbook that knows almost everything about the world and humanity from 10,000 BCE to 2010 CE. I truly dread the day I have to turn my textbook in to the book room, because it has taught me so much. And, don’t even get me started on my affection for my notes book- the color-coded sections, tabs, and wide-ruled paper are dreamworthy. My notes book has helped me prepare for many a WHAP test, and I will keep it on my bookshelf for the rest of my life.

To people who did not like WHAP, or did not take the class: I respect your decision, but you missed out. WHAP teaches of more than history; it teaches of self-discipline (because you literally have to make yourself do the homework every night and not be lazy and watch Netflix), it teaches of the terrible falls of man (such as the crusades), and finally, it teaches of the wonderful things humanity has created, accomplished, and learned. My name is Jillian Sanders, and I love WHAP.