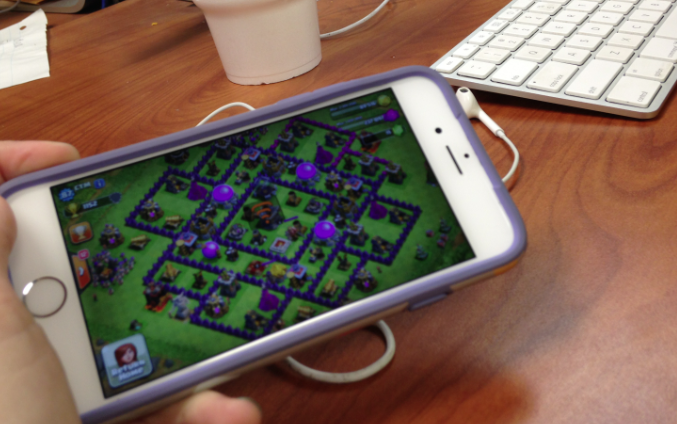 Juniors Brock Bittner and Ben Ominara have started the Clash of Clans club, combining gaming with an opportunity to raise money for Cypress ECG Project.

The school’s newest club allows students to fight giants, dragons, wizards, and heart disease all at the same time. The Clash of Clans club, founded by juniors Brock Bitner and Ben Ominara, is an organization where students can play a popular game on a smartphone and raise money for charity.

“We came up with the idea because at the time I was playing Clash of Clans, and I was like, ‘Hey, you know what, why don’t we make a club out of it?’” Bittner said. “That way we could all come together and play together, and it would be fun. It’s not really super official yet, but hopefully a lot of people will join when it is.”

Club members will be encouraged to donate money to Cypress ECG Project to support student athletes and promote early detection of Sudden Cardiac Arrest. For Ominara, who is a swimmer, the cause is close to heart.

“I’m giving back to that,” Ominara said. “It’s left ventricular hypertrophy. It’s basically where your heart is really thick, really big. I have a big heart, literally. So if it gets too big, you can actually get heart failure.”

The money that is not given to Cypress ECG Project will be put towards iTunes gift cards. The gift cards will be rewarded to members to buy gems for the game, which Ominara hopes will bring in new members and encourage more people to donate.

“You just play games and donate to charity,” Ominara said. “That’s all you do. It apparently sounds smart to some people. I just thought of it in English class one day. I thought it was going to be stupid, but apparently people want to do it.”

The club has already gained support from some potential members.

“I think that it’s a good idea,” junior Tate Thompson said. “It’s using something that we do anyways to help raise money for a worthy cause.”