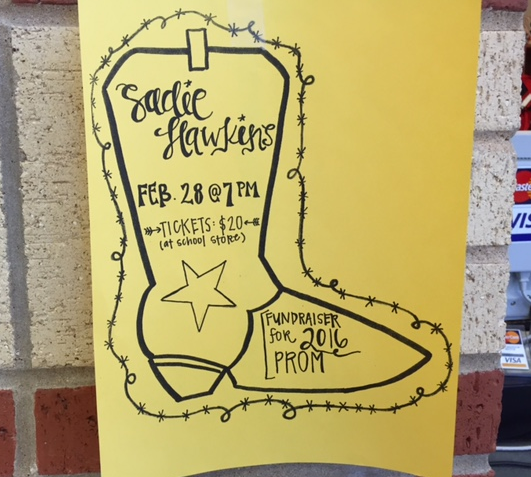 The original Sadie Hawkins dance, on February 28, has been rescheduled to March 7.

The Sadie Hawkins is back on for Saturday night after the dance previously scheduled for Saturday, Feb. 28 was postponed due to inclement weather.

“I am happy the dance is rescheduled,” freshman Kaeli Wilburn said. “I was really disappointed to hear it was canceled because I had a date for the dance and when I heard it was going to be this weekend it really raised my spirits because I was really looking forward to my first Sadie’s dance.”

The call to cancel the dance was made when weather conditions raised some safety concerns.

“Mr.Mayfield made the decision to cancel the dance just based on the weather and the road conditions,” administrative assistant Sara Yaeger said.

The rescheduling was a good thing for some students.

“I was unable to go last weekend due to previous plans even though I really wanted to go,” sophomore Avery Cordina said. “But now that the dance was moved to this Saturday I can go to the dance and not have to worry about missing my other plans.”

The dance organizers are hoping for a better turnout than if it would of been on Feb. 28.

“I hope that the attendance will actually be higher,” Yaeger said. “People will have more time to purchase tickets and things like that but we will see and we have never done anything like this before.”

Now that the dance has been rescheduled, more students are planning on going now.

“When I heard the dance is rescheduled I realized I had more time to think about who I was going to ask,” freshmen Avery Bramlett said. “If the dance would of been last week then I would not of had a date and now I do so the bad weather worked in my favor and I think the dance is going to be more enjoyable with the person I asked then it would of been before.”