Puberty arriving sooner than ever for some 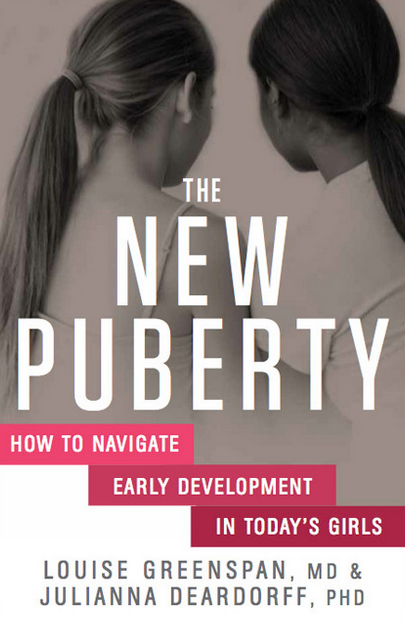 The recently released book "The New Puberty" takes a look at why puberty is starting for some girls as young as 7 or 8-years-old.

Puberty is an awkward time for everyone, boys and girls alike. Now it’s happening more and more for girls as early as 7 or 8 years old, says the recently released book The New Puberty by doctors Julianna Deardorff and Louise Greenspan.

“Just a generation ago, fewer than 5 percent of girls started puberty before the age of 8; today that percentage has more than doubled,” The New Puberty website says. “Early puberty is not just a matter of physical transformation — it’s deeply psychological too, with effects that can put a girl at higher risk for behavioral problems as well as long-term health challenges such as obesity, depression, eating disorders, and even cancer.”

It is suspected that this early development is largely caused by an estrogen-mimicking chemical common almost everywhere.

“There [are] several chemicals that may mimic estrogen in the body,” Greenspan reported to NPR in December. “In animal studies, a big one that we’re looking at — the culprit is called Bisphenol A, or BPA. BPA was actually invented as a medical estrogen, and it ended up becoming ubiquitous in plastics [and] … it’s also on paper, receipts and in other compounds. The concern is that it may leach out of those and into our bodies and may act like an estrogen.”

However, the cause cannot be pinpointed due to environmental factors and other variables.

“Our study has not yet demonstrated that this one, single chemical is causing early puberty, but it is one of the ones we’re looking at,” Greenspan said. “One of the problems with deciding which chemical is that there’s no one single smoking gun. We live in a toxic milieu of many, many, many chemicals and it’s actually becoming impossible to isolate the single one, so we’re looking at the ones that may work together.”

There are many common misconceptions that “The New Puberty” seeks to dispel, in hopes of ensuring health for children experiencing what is being referred to as “precocious puberty.”

“Girls at these young ages aren’t thinking about sex,” Deardorff said to Real Simple. “As parents, we have to make sure that we’re not sexualizing that development unintentionally, because that’s already happening enough in our culture.”

Girls can feel ostracized by their peers, and even their parents.

“I got my period when I was in 4th grade, and it was hard because nobody else understood what was going on, that I was cramping, or why I wasn’t in a good mood,” senior Alexis Breazeale said. “Summer after that, I had to use my first tampon, and I was really frightened, I thought I was gonna die, I thought I wasn’t a virgin. My mom was really uptight about that kind of stuff, and didn’t explain anything to me so I had to find out about it for myself and it was really scary.”

It doesn’t have to be this way though, The New Puberty explains that there are many things that parents of children experiencing early puberty can do to help dampen potentially harmful emotional, behavioral, and social effects for their children.

“If you’re growing up in a loving, safe family environment, it can offset any risks of early puberty in terms of emotional problems or mental health problem,” Deardorff said.

It’s up to parents to help their children with this transition, whenever it may occur.

“We knew that parents were an integral part of their children’s health and development,” Frisco pediatrician Rachel Walden said. “This just demonstrates it further. It’s the parents’ job to realize that their child is exactly that, a child, and that they’re in a very important stage of mental and emotional growth, and that their actions can permanently impact their kid’s future.”