It’s all about Running the Edge 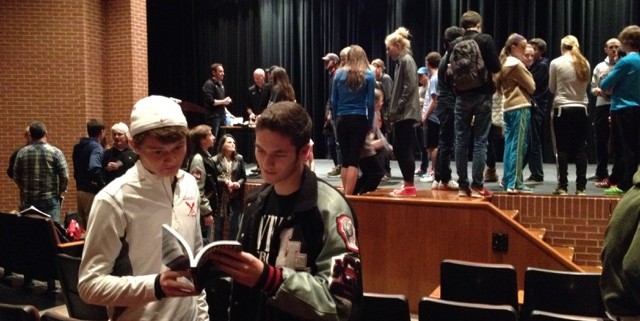 Juniors and cross country runners Jacob Myers and Brock Bittner flip through the book Running the Edge after getting it signed by the authors at the presentation in the auditorium.

The cross country team is in off-season but the team recently received a talk from two distinguished runners. Adam Goucher was an Olympic runner, won four NCAA titles, was a Foot Locker National High School Cross Country champion, and a world championship finalist. Tim Catalano, along with Goucher, ran at the University of Colorado, where Catalano received a degree in Psychology and then went on to teach worldwide. Together they wrote the book Running the Edge.

“Our book is a mashup of positive psychology and distance running,” Catalano said. “I was a psychology teacher for 13 years and a runner. We thought what we learned from distance running can be applied positively to other aspects of our lives and can help us be successful.”

The runners spoke to the cross country team and then to the community about setting goals and how to live an “extraordinary life.”

“I thought it was a great experience to have an ex-Olympian come and speak to our runners about having some for the same running and life struggles that we go through,” head cross country coach Greg Christiansen said.

Their book, originally geared towards high school runners, connects back to the mind-set of runners and their personal and athletic abilities. The book shares some of their stories about what running has taught them which, they hope, inspires other young runners.

Goucher knew he had a talent for running but stresses that talent can only get athletes so far, and that hard work is important.

“God given ability only lasts so long,” Goucher said. “As you get older, you’re starting to compete against people that have very similar talents and abilities as you. As you get in the collegiate level, you’re racing against 280 other state champions. You have to build and train.”

To some of the school’s runners, the book combined with hearing Goucher and Catalano talk urged them to strive for their own kind of extraordinary.

“I learned never to settle and to always strive for your goals and never give up, and once you achieve a goal, you need to make more goals,” junior cross country runner Will Wise said. “The book made me think about my goals and what I wanted to accomplish in running as well as other areas like education, school, and family.”

The school’s cross country program uses the book to train team captains and Christiansen encourages all his athletes to read the book.

“We use the book as a tool for team and captain development,” Christiansen said. “At our Taos Camps we discuss, in the evening, a lot of the principles outlined in the text. I wanted them to learn that there is more to being an athlete than workouts/racing, to not settle for good enough, push, and take advantages of the opportunities they’re presented with daily.”

Goucher and Catalano speak to runners and people across the country. They offer training booklets to prepare for running 5ks to marathons, along with an order form to purchase their book, but to these two best friends, running is an inspiration all in its own.

“Running is a perfect metaphor for figuring who you are in life,” Goucher said. “What you learn from running and what you learn from yourself and when you’re out there in the cold, in the snow, in the rain, on the track and when you’re in pain and you hurt, but you’re still pushing yourself, those are the moments when you learn the most about yourself, and what you’re capable of doing in life. And when you can realize how hard you can push yourself and how determined you can be to achieve something, the goals you set for yourself, those are moments that define you. Not as runner, but as a person. Get out there and figure out who you are.”