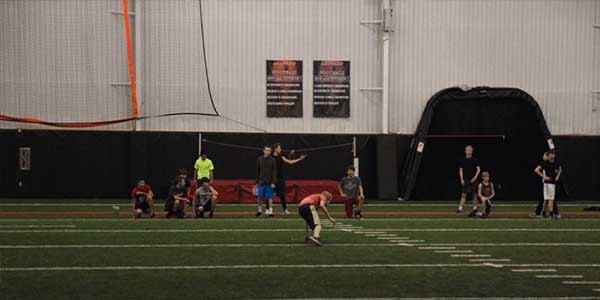 Football continues to challenge themselves during offseason to prepare for the spring and fall seasons.

Football season has been over for more than a month, but this year’s offseason program could be tougher than anything the team endured during the fall as this year the coaches have decided to take a more “military” approach.

“[We are using this approach to teach] developmental leadership, structure, and regimented approach to organization,” head football coach Ryan Cox said. “It gives us the ability to grow kids as leaders but it also puts all the aspects of organization and accountability in the hands of the team. I like it because it allows us to do that by the structure we developed. We get to organize our offseason but put the leadership development into it as well.”

Even though the new offseason is said to work well, some athletes aren’t as big of fans of it as the coaches.

“[Football offseason] is awful,” junior Austin Mitchell said. “It’s awful because all the coaches yell, there is really hard conditioning and it takes a lot of work.”

“In the weight room we have five minutes to do six lifts with the coaches all over you, yelling, to make sure you get every rep and set done,” junior Jake Schmidt said. “In the turf room we condition, which is very very hard. We do mat drills, where we roll, push up, and bear crawl across ten yards. Then we do hurdles, sleds, and sprints.”

The offseason football players are split into five different “companies”.

“[What makes football ‘miliary’ is that] there are companies, which is basically just a group of people and right now there are six companies,” sophomore Cole Egger said. “There is alpha, bravo, charlie, delta, echo, and foxtrot. Each company has their own general and sergeant. The general is the leader of the group and the sergeant is in charge of green slips and attendance.”

Similar to the military there are penalties for certain infractions.

Athletes say some parts are more difficult than others.