No, Pluto is not a planet (yet) 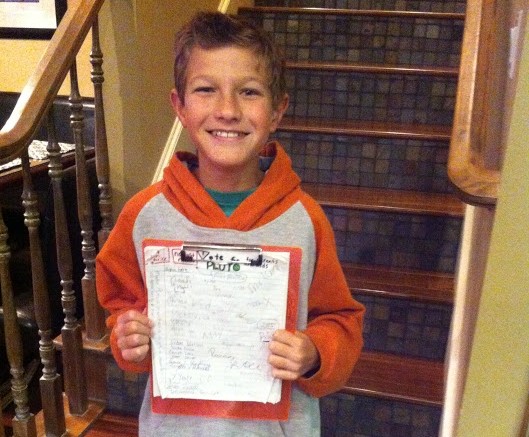 While some little boys play sports, others petition for Pluto.

Some siblings play sports or constantly interrupt your study sessions. Mine makes petitions to promote dwarf planets into real planets.

Jackson is my 10-year-old brother and he’s a fourth grader at Puster Elementary. When he heard the Harvard-Smithsonian Center for Astrophysics was reopening the Pluto debate, he decided that he needed to help Pluto out.

Right now, Pluto is officially classified by NASA as a dwarf planet and a plutoid, but still not an actual planet. The International Astronomical Union, which is in charge of naming planets as well as organizing scientific conventions and astronomy research, has based the definition of a planet on three requirements: it is a celestial body that is round or nearly round, is in orbit around the Sun, and is not surrounded by objects of similar size and characteristics. Pluto meets two out of three of these requirements but has similar objects of the same size near it.

The debate held at the Harvard-Smithsonian Center for Astrophysics featured three experts in planetary science making their cases as to what a planet is to an audience. The audience voted in favor of the definition that made Pluto a planet, given by Dimitar Sasselov, but NASA hasn’t officially acknowledged this.

“Well, I heard about Pluto from Mrs. Meaders, when we were doing a reading assignment, and I wanted to do something about it,” Jackson said. “So I made a petition to try to change [Pluto’s status].”

He put a lot of work into the petition, taking it to school, soccer and baseball games, badgering our dad to take it to work, and I even took it to school. So far he’s gotten nearly 140 signatures, including his homeroom teacher, Rebecca May.

“I absolutely knew Jackson would get the signatures he wanted, because he was pretty relentless in getting them,” May said. “However, I had no idea he would have the connections to take it much farther than that. It’s a really cool thing to see a child become so inspired.”