The fault in the Red Ribbon 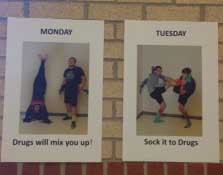 Whether it's advertising dress up days or the dangers of drugs and alcohol, Red Ribbon Week posters can be see all across campus.

Most of us have known about Red Ribbon Week since elementary school. I remember how exciting it was back then, wearing pajamas or athletic gear or a backwards outfit and attending Family Fun Night behind the school, running to the bounce houses as fast as my feet could carry me. I may have been under twelve years old, but I knew that the whole point was to prevent the use of drugs and alcohol. That part wasn’t a joke. Here I am seven years later, and we still raise awareness during Red Ribbon Week with dress up days and posters stuck on the walls.

Most high schoolers seem to be treating many subjects, such as drug abuse and alcoholism, like a joke when it comes to the posters promoting Red Ribbon Week activities. It doesn’t stop there though. Posters about important issues such as depression, self harm, and suicide display their information in a humorous way when these are some of the most serious topics that students should be educated about.

It’s not helpful seeing posters using lyrics from “Boom Clap” to talk about drug overdose, or using a colored pencil drawing of Kermit the frog to promote suicide prevention. They should be providing helpful examples that actually educate students. Quite frankly, to many people, myself included, it’s a slap to the face. When it’s presented so cavalierly, students will just think that “we’ve heard it all before” and it’s not important. Some may believe that these problems are inevitable so there’s no point in trying to stop them, while others may be naive as to the magnitude of the problems so they don’t view them seriously. Either way, they’re treating these issues like they don’t really matter, like they’re not important enough to focus on, like there is no point in using our voices because no one is going to listen.

But awareness is important.

There is more to these struggles than what a one sided poster or a pamphlet in an office can cover.

These issues have impacted many students at this school, and every school in the country. Why aren’t we including that? Why are we isolating ourselves from the problem? Why don’t these posters say that students aren’t alone when facing such serious, often dangerous problems in their lives?

We are not alone.

I wish that’s what these posters said. That we are not alone. That there are helplines and even chat rooms that are open 24 hours a day every day, that- no matter what- at least one person is willing to be there for someone else, that we should be there for one another, that there is help, that there is hope.

This isn’t a joke. It’s time to stop treating it like one.