Young tennis team on the rise 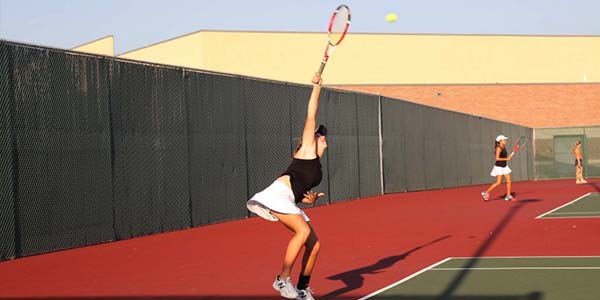 The Leopard tennis team begins the individual portion of its season with Friday's Polar Vortex Tournament in Frisco.

Experience in any line of work is a near necessity and holds a plethora of possibilities. However, experience is something this year’s tennis team clearly lacks. Head coach Adam Cherry was left scratching his head for answers following the departure of notable players, such as Autumn Keefer, Katy Berkhart, Ryan Ford and Sam Menz.

“We lost a good group of seniors,” Cherry said. “Autumn Keefer accounted for two wins pretty much every time she stepped on the court.”

With all the experience gone, new faces needed to step in and step up.

“I am very pleased with our freshman class this year,” Cherry said. “I think they have settled in nicely and are enjoying being on the varsity tennis team.”

Four different freshmen have been added to the team and have helped the team to a nearly perfect record as the team suffered its first loss (10-9) on Tuesday to McKinney North.

“We work extremely hard and encourage each other constantly during our matches,” freshman Jack Bennett said. “I’m just proud to be part of the team and am enjoying support from the upperclassmen. We definitely have our eyes set on making it to state.”