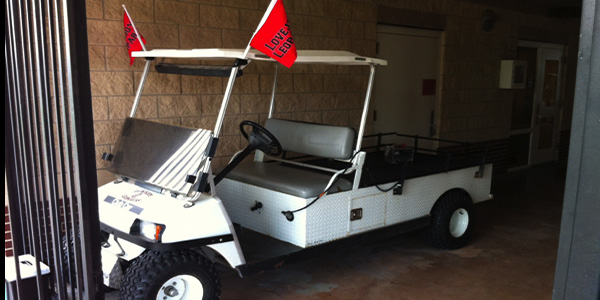 The school hired a parking attendant to monitor the parking lots for five hours a day.

New school year, new parking regulations. The school did away with the outdated early line-up for parking spaces and adopted a modernized solution that allows students to select their space online called Vendini. Additionally, prices for student parking spaces have doubled to $60, but not without reason. Students will become familiar with a new face in the parking lot throughout the year.

“Late last spring, early summer we decided that we wanted to have something that almost every other school district has,” assistant principal Bruce Coachman said. “Somebody during the day helping with the parking lot to protect against potential vandalism, strangers or intruders, as well as supervising and monitoring certain students that have to go off campus.”

The new parking lot attendant will look out for the safety of the students, as well as enforcing parking and off campus rules.

“My duty is to police the parking lot, to make sure the students are in their correct parking spots and have tags,” parking attendant David Willoz said. “I will be keeping an extra set of eyes on the building, and making sure that we don’t have anything happening that’s unusual or bad.”

Students in dual credit classes, off-campus PE, or with off campus privileges are assured that they will not have these freedoms infringed upon.

“What we’re trying to do now is to develop a pass system similar to the one that is used when a student is late to school and they check in at the front office,” Willoz said. “Right now it’s on the honor system until they put that in place. I’m just asking the students where they’re going, if they have a doctor’s appointment, if they’re in dual credit and waving them on.”

Students attempting to leave campus for lunch, or simply to skip class will now have a difficult time doing so with Willoz monitoring the parking lot.

“If I see a student leaving and they don’t have a reason, I will have to get their name, and if they don’t give me their name then I’ll have to take down their license plate or parking pass number and report it to school resource officer Mark Mitchell,” Willoz said. “My job isn’t confrontational, I’m just here to make sure that everything is safe and all of the parking goes smoothly.”

Willoz has already had to confront a student about staying on campus during lunch.

“I walked outside trying to be a sneaky Mac Phillips,” senior Mac Phillips said. “Basically what happened was the parking attendant turned his turbo on in his golf cart and told me that I couldn’t go to Canes, and I had to go back inside because I wasn’t supposed to be leaving.”

Willoz had previously worked in the district and applied for the job online immediately when it appeared.

“We wanted to try to if we could, utilize someone who was already in the district who was working in some other capacity,” Coachman said. “In this case, this gentleman is semi-retired, and he has bus routes that he runs in the morning, so he’s free during the day. That gets someone we already know, trust, and value, who knows our students, knows our community, knows the area. There was very little in the way of him having to learn what we wanted him to know. He was also someone we trusted and had a heart for kids and knew had the best interests of our students in mind and knew the values of our community.”

In order to afford the new attendant, the district doubled the prices of student parking spaces, however, some don’t agree with the increase.

“I think it’s ridiculous that I even have to pay to park at my own school,” junior Glennon Carevic said. “$30 was enough; raising it to $60 is way too much.”

The goal of employing a parking attendant is to prioritize the safety of students, regardless of the price.

“I don’t know what value individuals put on another measure of security,” Coachman said. “I don’t have data to tell you how much it helps. I know that the amount our students pay is significantly more than neighboring districts ask their students to pay. I also recognize that we are unique, because of the way that our students behave. They are generally compliant and well-behaved. Having said that, I think that doubling the cost is worth the extra cost or we never would’ve proposed the idea in the first place.”