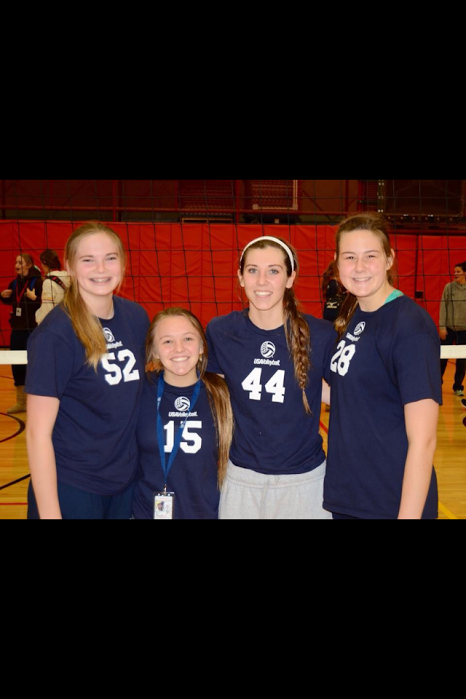 Sophomore Sarah Langs posing along side members from her international team.

One of top volleyball players in the area, junior Sarah Langs is continuing the Leopards tradition of taking part in the U.S. national volleyball program. Langs will be playing on the youth national team that plays in Costa Rica beginning June 22.

The Red Ledger sat down with Langs before she heads out to the training camp in Denver on June 13.

The Red Ledger: How did you get this opportunity?

Langs: “I found out about it from Andy Molloy. She has played or the youth national team and the junior national team, and you try out before a big qualifier for club. Including me, Lovejoy has three people that have have done the pipeline, Andy Molloy and Ebony.”

The Red Ledger: Where will you be traveling?

The Red Ledger: What was the tryout process like?

Langs: “You just go before a club tournament and tryout. It is a four hour tryout.”

The Red Ledger: What were your thoughts when you found out you made the team?

Langs: “I was very excited. I talked a lot about it with Andy and Ebony, because I am having to miss the first day of nationals, and also because they have done all of this before. Ebony is actually in Switzerland right now with the Olympic team. But, I was really excited, my teammates and coaches helped me a lot.”

The Red Ledger: How does this help with the ladder to the Olympics?

Langs: “This is the pipeline. There is the junior national team after this and then a college national team.”

The Red Ledger: What is the training and competition like?

Langs: “I don’t really know yet because it is my first time. But Andy has told me that it is a two or three-a-days, and we watch film from the 13th to the 22nd. Then we go to international play, so I’ll play people from China and Costa Rica.”