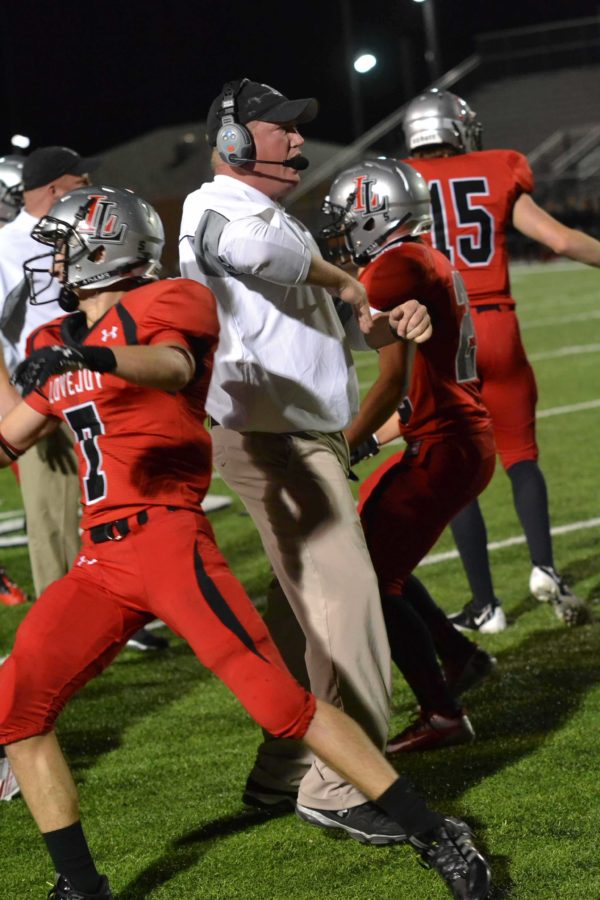 When Matt Green resigned as the head football coach during the middle of spring practice, the school immediately launched a search for his replacement. With candidates applying from as far away as California, the school received dozens upon dozens of applications. But while the search may have extended far beyond the Lucas-Fairview area, Green’s replacement was already on staff as former defensive coordinator Ryan Cox was named the new head coach on Monday.

Although Cox has been busy trying to get himself situated in his new position, he took a few minutes to sit down with The Red Ledger.

The Red Ledger:  Describe the process of the second coach Green announced his resignation up to the point you were hired.

Cox: “When coach Green left, we knew that we still had work that needed to be done. We knew that spring football was not going to be suspended or canceled or there wasn’t going to be an attempt to try to reconcile days lost in spring to try to gain days in the fall. So, Coach Priem and I knew that spring ball was still going to continue, and that we had a lot of work on our hands to make sure that the work we had done up to that point had not been forsaken or forgotten or was not a waste.”

The Red Ledger: What was it like knowing that you were up against Coach Priem for the job?

Cox: “The process of coach Priem and myself, in our conversations, we decided that we both knew we wanted to go for the job. We both knew that if we went up against each other that the only way the either one of us could be successful is to go in and let Mr. Moore know that we were arm in arm, that if you hired one of us, you got the other. We made that abundantly clear to him, and we let him know that we both were going to apply for the job, and that we both were going to stay if the other got the job.”

The Red Ledger: What was the interview process like?

Cox: “Coach Priem and I knew that we were up against some ‘heavy hitters’, as coach Puckett put it. We knew that we were up against some talented coaches. We didn’t know who they were, we just knew that they were going to bring in some talent, and we did our best. Coach Priem and I went in with the attitude that we are going to show them what they’re going to get if they choose us. I think it was apparent by the district bringing us two back for the final interviews that we did an excellent job in there the first time. After they interviewed Coach Priem and I for a second time they wanted to sleep on it over the weekend, and then Monday morning we found out the district’s and committee’s choice for the new head football coach.”

The Red Ledger: What changes, immediate or long term, will you make as the head coach?

Cox: “Well, the only immediate change that will be made is that I have moved my stuff into the head coach’s office. Any other immediate change, I think, is just… I don’t know those yet. I don’t know what’s going to happen. I know that our program is in place, and the foundations that Coach Green left this program with are those of a championship program. And so, to come in and try to make wholesale changes to where the program is now would be detrimental to the success of this program, and they are unnecessary. As far as immediate changes, I don’t see very many. As far as long term changes, I see our success continuing to climb. That’s the biggest thing. We’re going to continue to build off the success from the previous staff, and I’m going to use my staff to keep this growth incline continuing.”

The Red Ledger: How will your coaching differ from being head coach compared to a defensive coordinator?

Cox: “Now it is not just the defense that I have to be concerned with. Now it is the entire football team as a whole. That doesn’t mean that I have all of the sudden learned how to coach offense. I’m not going to start sticking my nose in on the offensive side of the ball, because I am not going to mess with 43 points a game, that is what our offense averaged last year under coach Priem and coach Green. Coach Priem and I both expect that to rise, and I’m not messing with it. I know that overall it is my football team, and I am ultimately responsible for all the decisions, choices, actions, and the results for each game and season. But, I am smart enough to understand when I see a good thing and to let those coaches continue to do the good job that they have done on the offensive side of the ball. On the defensive side of the ball, I’m still going to call the defense, and we are still going to work the same way, even harder as a matter of fact now that I’m the head coach.”

The Red Ledger: What are your expectations for the program in the future?

Cox: “To win. Win big. Win a lot. Graduate kids. Graduate every kid. Get as many kids into college as we possibly can. To give kids a work ethic, and a sense of self-efficacy for the next stage in their life. Whether it be football, whether it be business, or whether it be college. I want to give them the belief in themselves that no matter what they do after they will be successful. I want to teach them how to work, and teach them to be young men and productive members of our society.”