West, Texas: a year of recovery 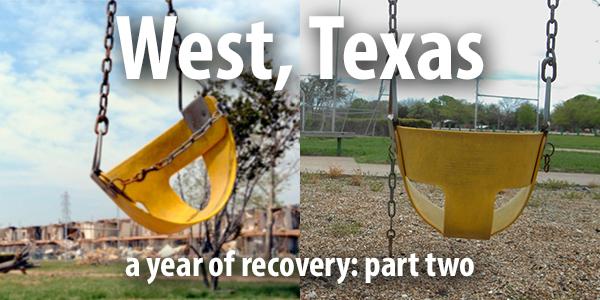 Nearly every high school student has had the secret yearning for something to happen so there’s no school for a few days. The students of West High School probably had some of the same thoughts before the night of April 17, 2013. But that’s when everything changed as the West Fertilizer Company exploded, destroying several city blocks including two schools.

“The high school, which was grades nine through twelve was, was just across from the fertilizer plant. It’s now gone, it was damaged pretty severely, and it’ll have to be rebuilt,” Vice Principal of West High School Jeremy McCain said. “The nearest campus to the plant was the intermediate school, of course, it was completely destroyed, in the event. We are very grateful that this took place in the evening, and the students were not at school and nobody was in the building.”

In the effort to return to normal as fast possible, the district found itself in desperate need for school space.  In the search for finding an adequate space for school use, the West ISD found help from a neighboring district.

“Our friends down the road at Connally ISD provided a place for us to be for the remainder of the school year,” McCain said. “The explosions took place on a Wednesday evening, and we didn’t have school for the following two days, but by the next Monday, we were back in classrooms, back teaching and together, having school.”

The weeks after the blast were a difficult transition period for students. They lacked some supplies necessary for their studies.

However, using Connally’s facilities wasn’t a long term answer so the West ISD set up portables on the middle school campus to serve as both the middle and high school campuses.

“[The middle school] was the only campus that really was left remaining. [The portables] were brought in during the summer months, and they were set up and installed, we got them ready to go and we started school as scheduled.”

This served as a major change for the students as there were problems in the classroom, but most students quickly adapted to the new environment.

“When we started school we didn’t have all the buildings complete, for design my classroom went seven weeks without computers, so we were doing computer classes without computers, that was a big change,” Woodard said. “We went back to the old school, instead of using computers we did the projects by hand. So they were doing a lot of drawing and advertising and those kind of things the old fashioned way. It was still a good experience for them, and it was okay.”

Eventually everything was put in place and prepared for the students; bringing a return to normalcy.

“[Class sizes haven’t really been affected]. Every teacher has a classroom,” McCain said. “We are able to provide a classroom for every teacher, so class sizes and the schedule haven’t had to change too much.”

While classes were the same for the most part, innovative solutions were needed for extracurriculars and other activities offered by the school.

“We’ve had to be creative about how to schedule some [extracurriculars]. We went from having four gym spaces to now having two. So when you think about secondary gym sports, everything from seventh grade through varsity programs, especially during basketball season, it got a little crowded, but we were able to get creative with scheduling,” McCain said, “Our band program is one one of the large portables, that’s our band hall. Our One Act Play, they had to get creative about how they stage things and how they did rehearsals. We’ve been able to use one of the local halls, the Columbus Hall, they’ve been able to get in there and practice a little bit for competition a couple weeks ago. One of the groups that’s indigenous to West, our Junior Historians, they’re a dance group, they wear the traditional Czech costumes and do Czech dances, they’ve been able to do their thing and still travel and dance in different places, so all the extracurriculars have gone on.”

Of all the events and activities typical of a high school, one stood out in its ability to help rally the town together.

“[Football games were] one time a week where [the community] could actually get together and converse with each other,” football coach and U.S. History teacher Brian Strickland said. “They would take out a trailer and have people on the back and shake hands. Whatever the case might be that was a central point after the explosion, just for people to come and congregate.”

Although the season was not what they wanted it to be record wise, it was still a success in terms of the community and the team’s future and ability to grow.

“Well, the football team has been affected just because they felt the weight of trying to lift up the community after the explosion,” Strickland said. “[Record wise], not where we want to be but as far as what we want to in competing and not competing, we were successful in that category.”

Although the portables on West’s campus have been a good temporary solution, it isn’t permanent. The new campus has been planned, and the new school will be extremely modern with construction expected to start later this year. The plans call for the middle and high school to be next to each other much like the layout of the current portables. Funds for both schools

“The Federal Emergency Management Agency will provide the West Independent School District with the money it needs to rebuild a high school and an intermediate school,” West Mayor Tommy Muska told The Associated Press.

Despite the tragedy from the horrible blast the school has been a place for the students, and community to come together. Although the past may be marred by memories of smoke and fire, the future for the town, and West ISD’s students looks very bright.

“The community has been awesome, folks have been very supportive at every turn,” McCain said. “Everything we’ve needed, folks have come together.