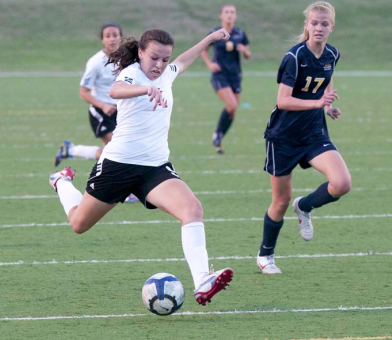 It’s a cliché because it’s usually true. For the girls varsity soccer team, every game does count as the Leopards battle for the district championship. The next game: tonight against Quinlan Ford.

“Winning the district is very much up in the air and we would need to win out to do so,” coach Jeff Kear said. “In this part of the state, North Texas and then Collin County, particularly, the best girls soccer in the state gets played in both club soccer and high school soccer, so, it’s usually pretty close and the outcome is never known in advance.”

It is a five team district with the top four teams going to the playoffs. Last year, Wylie was a regional finalist and Wylie East is currently ranked in the Dallas Morning News top 10 (along with the Leopards, ranked 10). At this point, the Leopards are in first place, but Wylie East hasn’t played as many games yet.

“It has been stressful because I feel like as a team, we have the potential to do something amazing that we aren’t aware of yet,” player Dominque Mozero said. “It has challenged me as a player to literally make every play count as much as I can.”

“They are doing a good job with motivation; the games with the two Wylie schools have become rivalries and that lends a lot of motivation to the performance,” Kear said. “We always want to beat a Wylie school and hold winning records, all-time, against both.”

Next Friday, the girls play Wylie East away at 7:00 PM.

“Now it’s going on a game to game basis and we have to win every single game now to hope we get in first or second place. It’s really stressful right now,” junior Madison Franquiz said. “As a team, we to step up our game, so now practice is more competitive. We’ve become more focused but we have a real challenge now.”