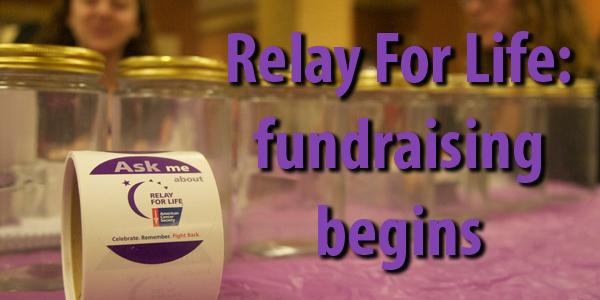 Feet are being sold in the commons for the next few weeks to raise funds for Relay for Life.

If students ever wanted to watch a whip-cream pie fly to the face of their favorite or not-so-favorite teacher, they now have the chance not only to see this happen, but to vote for who it happens to.

This is the first of a three-part contest that the Relay For Life committee will be holding as their first fundraiser of the year, beginning on Thursday, December 5. A table will be set up during all three lunches where the committee will be selling purple paper footprints that students can purchase for $1 to decorate, with each dollar also counting as a vote towards one of the eight faculty members who have offered to participate in the fundraiser. The faculty members included are principal Gavan Goodrich, Ray Cooper, Jeff Seidel, Judy Hise, Ryan Cox, Tami Parker, Shawn Purcell, and Michelle Riddle, and the teacher who gets the most dollars, or votes, will be pied at the pep rally on Friday, January 31.

“We thought this would be fun and really good promotional event for the awesome Relay For Life that we’re going to have on April 11,” junior and Relay For Life Director of Communications Matt Smith said. “We want to stomp out cancer.”

Students who purchase a footprint can decorate it any way they like. There is a line in the middle of the footprint on which they can write their own name, or the name of a loved one affected by cancer.

Students should hold on to the footprints they purchase until Thursday, December 19 when every third period class will create a mural or design in the hallway outside their classroom by combining all the footprints the students in that class purchased over the previous two weeks. The class with the best, most creative design will be the winner, and each student in that class will receive five free votes toward one of the eight faculty members in the running to be pied. The footprint hallway decorating will be the the second of the three-part contest.

“It’s a fun way to motivate the fight against cancer, and really just to have fun with it and publicize it around the school,” senior and Relay For Life Director of Teams Colton Alleman said. “The American Cancer Society does a

lot to help out people and it’s a good way to get involved with the community.”

The third contest of the three-part fundraiser will also involve the footprints that students purchase. Students can take pictures with or of their footprints and tweet it to the Lovejoy Relay For Life Twitter account @LovejoyR4L. The photos and tweets with the most creativity or the best decorated footprints will be retweeted, and the winner, announced on December 19, will win a prize.

The fundraiser doesn’t stop there. When the second semester begins after winter break, instead of footprints, the committee will be selling purple wristbands that promote the school’s Relay For Life event on April 11, 2014. Students will be able to pay either $1 for a vote, or $2 for a vote and a wristband. The wristbands and votes will be sold during lunches until Wednesday, January 29.

“Relay For Life is a celebration of survivors and anyone who has ever heard the words ‘You have cancer,’” Relay For Life Specialist Emily Smith said. “We do it for them.”