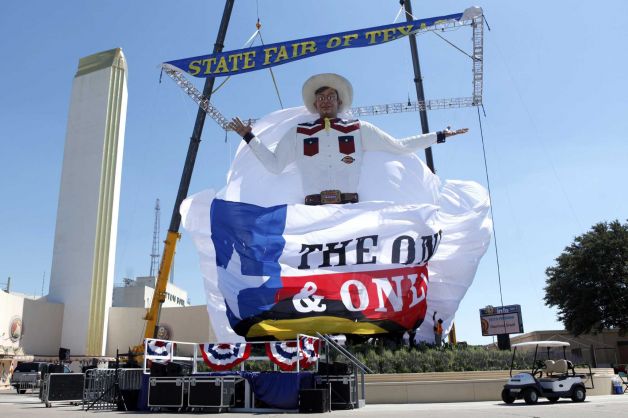 On October 19,  Big Tex was engulfed with flames and completely destroyed by an electrical shortage. Now, Big Tex has been rebuilt and redesigned to continue this Texas Legend. He was rebuilt by SRO Associates, a company that builds giant set pieces and shoots videos for many major themeparks such as Seaworld and Six Flags. It took approximatly 10 months to complete the new Big Tex, but of course, it’s not the same.

Big Tex was designed to be more lifelike. The new structure is three feet taller and freestanding (the old one had cables holding it up). It is also able to move more often and with more fluidity, his voice is more welcoming, he has new boots, new clothes, and even a new face. Big Tex was also designed to be whatever race the onlooker wanted him to be, whether that be hispanic or American.

Big Tex was unveiled on Friday, September 27, the opening day of the stae fair. A speech was given, a list of the people who donated money to rebuild Big Tex was read, and the words “Howdy Folks and Welcome to the State Fair of Texas” rang throughout the state fair, making history for years to come.